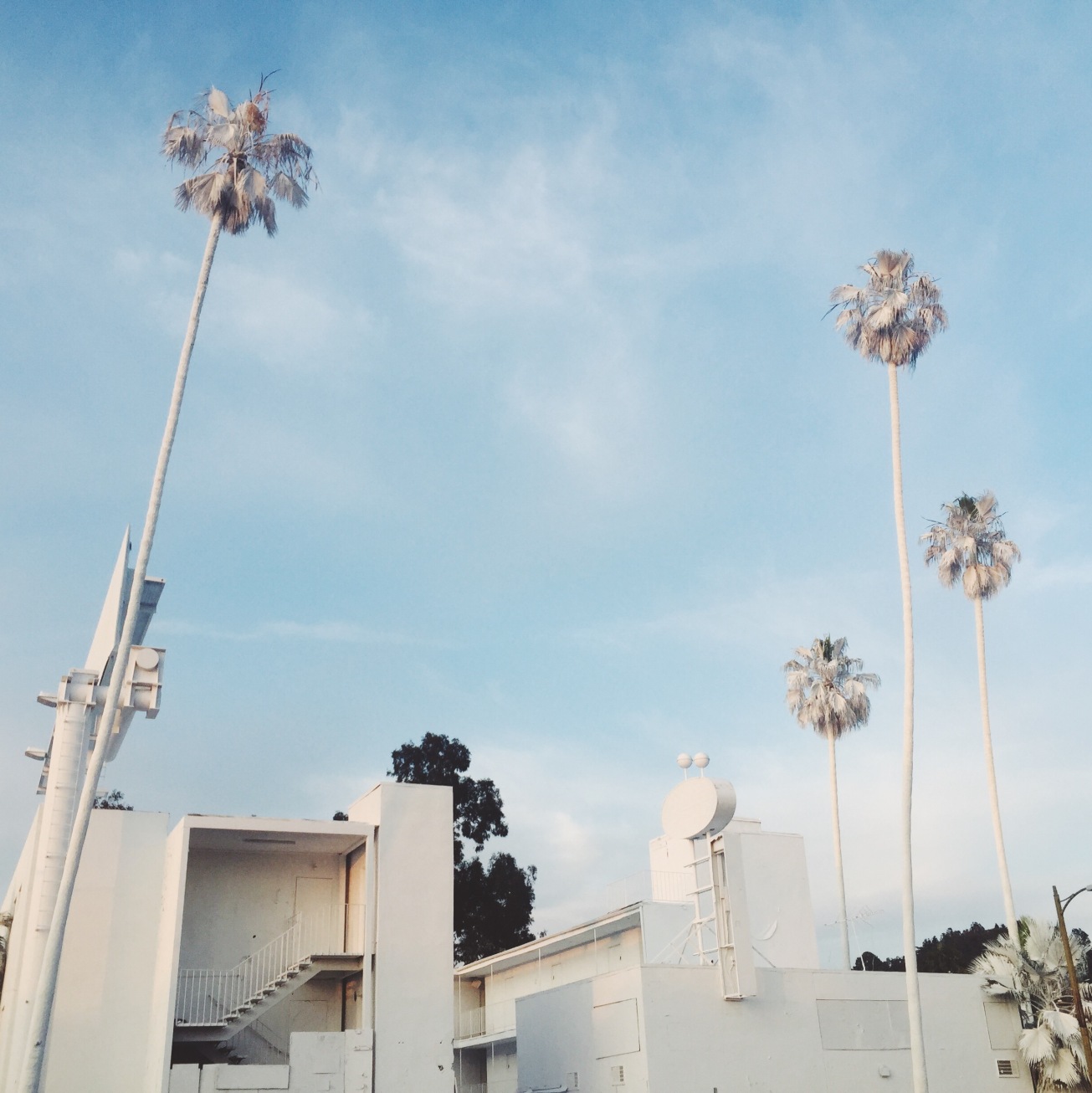 After my magical weekend in Topanga, I headed into LA to stay a week up in Highland Park. It took me nearly 2 hours to drive there, but I had some good jams on the radio and the summer air was warm and breezy.

It was Cinco De Mayo, and I met up with some friends to get margaritas. Which is what everyone seems to want to do that day. We ended up wandering around on Sunset, until we found a quieter spot to hang out and catch up. An old man caught this blurry photo of us in front of the mural that was our favorite Elliott Smith album cover.

That evening we headed up to the El Rosa House, one that I designed the interiors for last summer. It is always so good to come back to a place and see how it is being lived in, and how well things stand up over time. Even the plants were happy!

Dining at the El Rosa House, one of my macrame hangings in the corner.

A pair of super old friends whom I adore.

I hung out one day at a Korean spa, which is the best thing in the world to do when you have been on the road for over 2 weeks. I used to tell myself that I “will know I have made it” when I am interviewed by Terry Gross, but now my new barometer of success is to go once a week to the Korean spa. I will let you know when that happens… 🙂

After, I met up with some Portland lady pals for a nightcap.

My first of 3 LA area classes was held at Bucks and Does on Sunset. Laura and her husband, Jason, have been friends of mine since 2004 when I launched my first clothing line. They have the sweetest family, live in an amazingly curated but well lived in home, and are the most generous folks I know.

I loved teaching at their shop, everyone was so nice! A woman in the class looked so familiar. After talking together, I realized we knew each other from back in the fashion days. Her name was Julie and she is an amazing jewelry designer! We laughed, hugged, and she literally took the earrings out of her ears and gave them to me. I was floored by the generosity and so happy for the re-connection.

macrame making at Bucks and Does, check out the rad wall paper!! 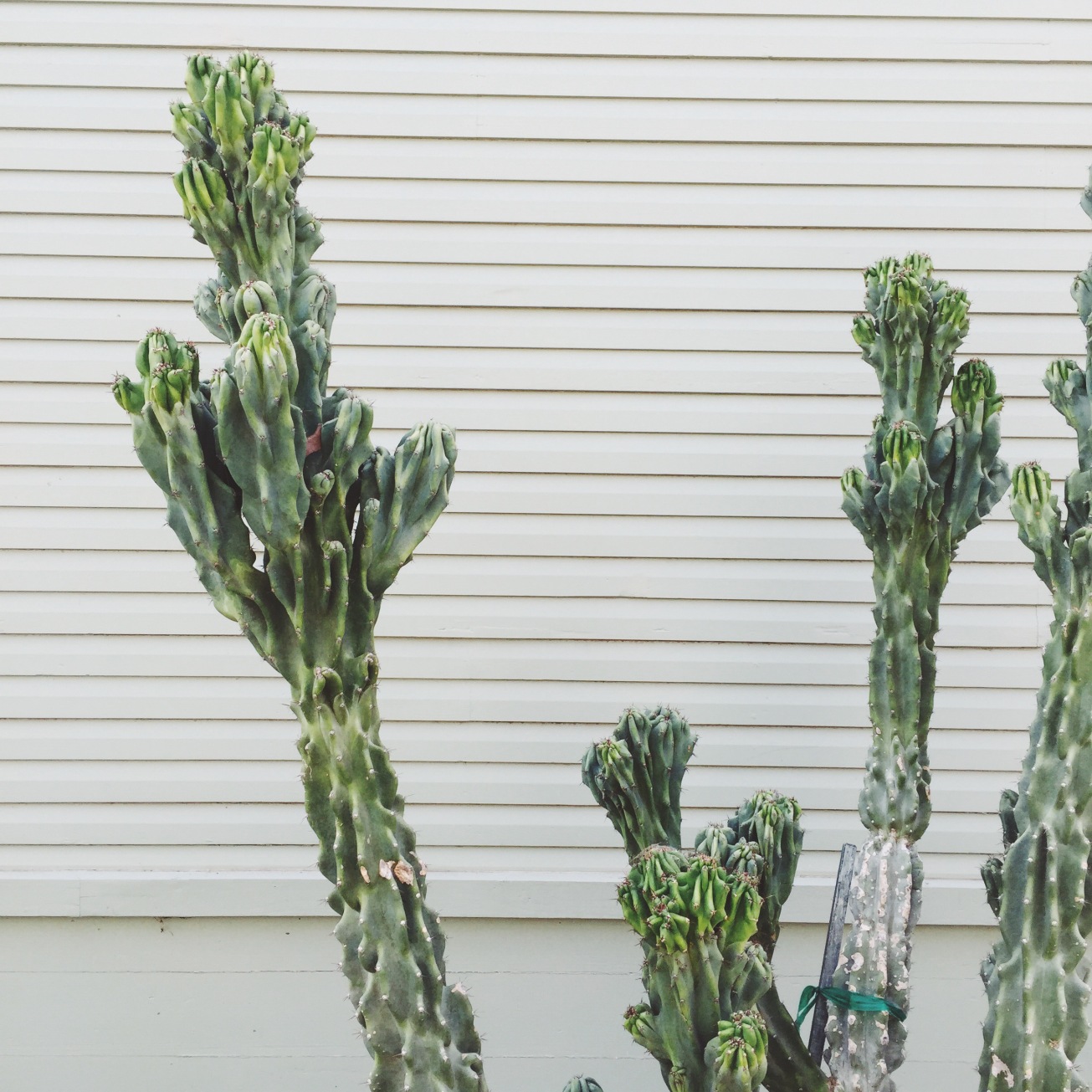 I was invited to attend a really interesting conference put on by Fast Company, and although I missed the first day, I headed over to the 72 and Sunny campus to learn and meet new creative business folks. While there I ran into a woman who had taken one of my classes, and another woman who I had met over the weekend at Mercado Sagrado…It’s a very small world.

everyone wants a donut! 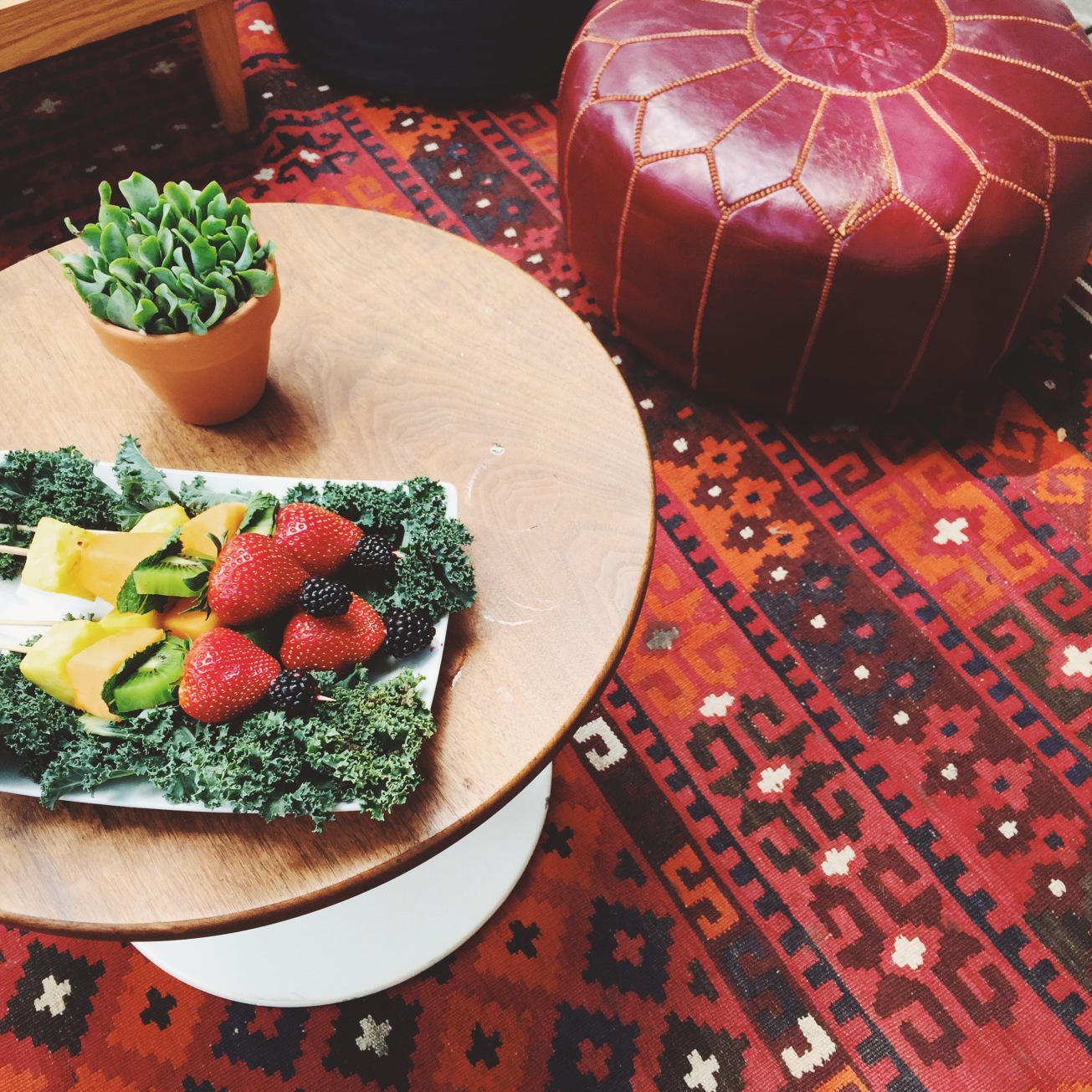 I love the textures and color palate 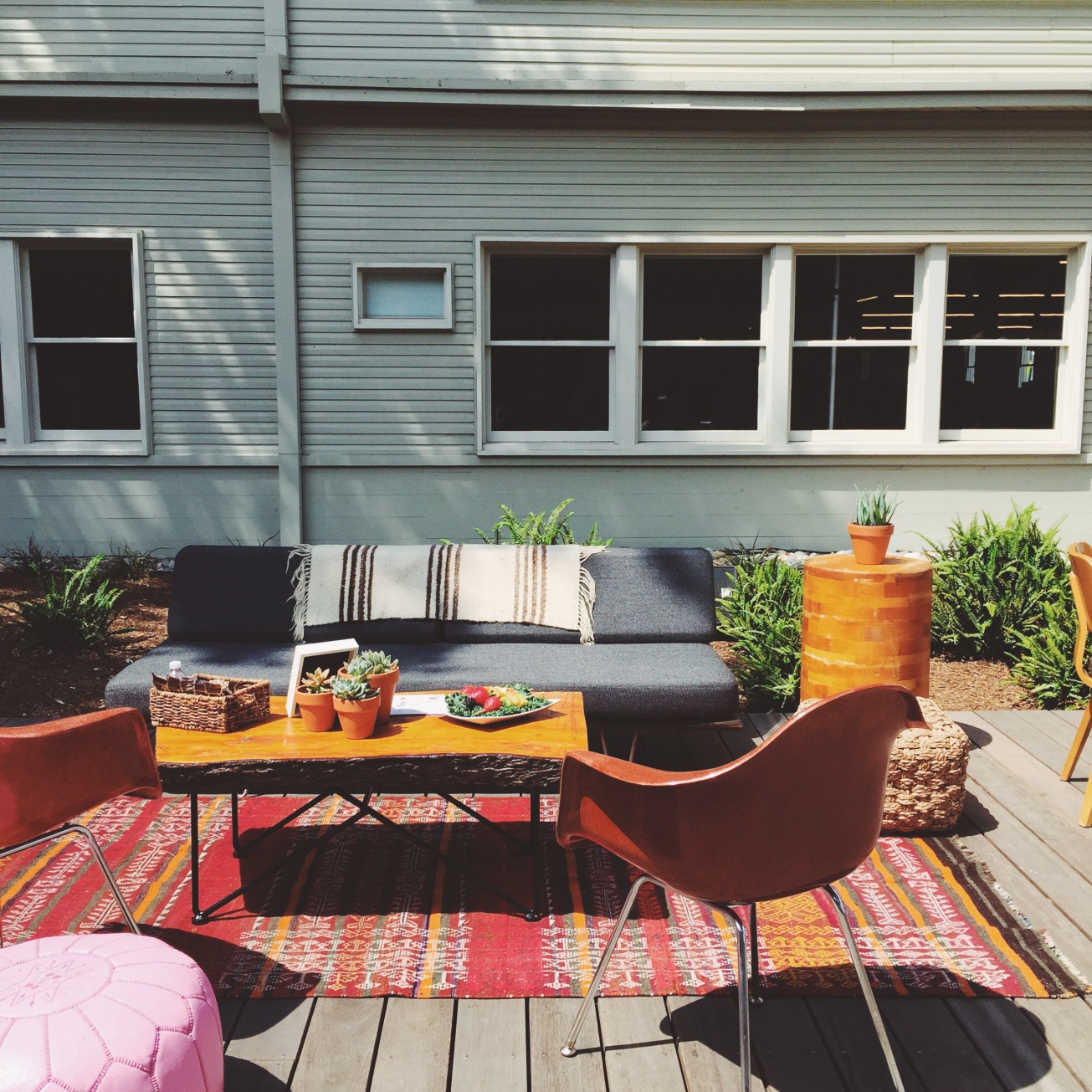 another sweet Yeah Rentals set up. Michael can I please just move all this into my house? Thank you… 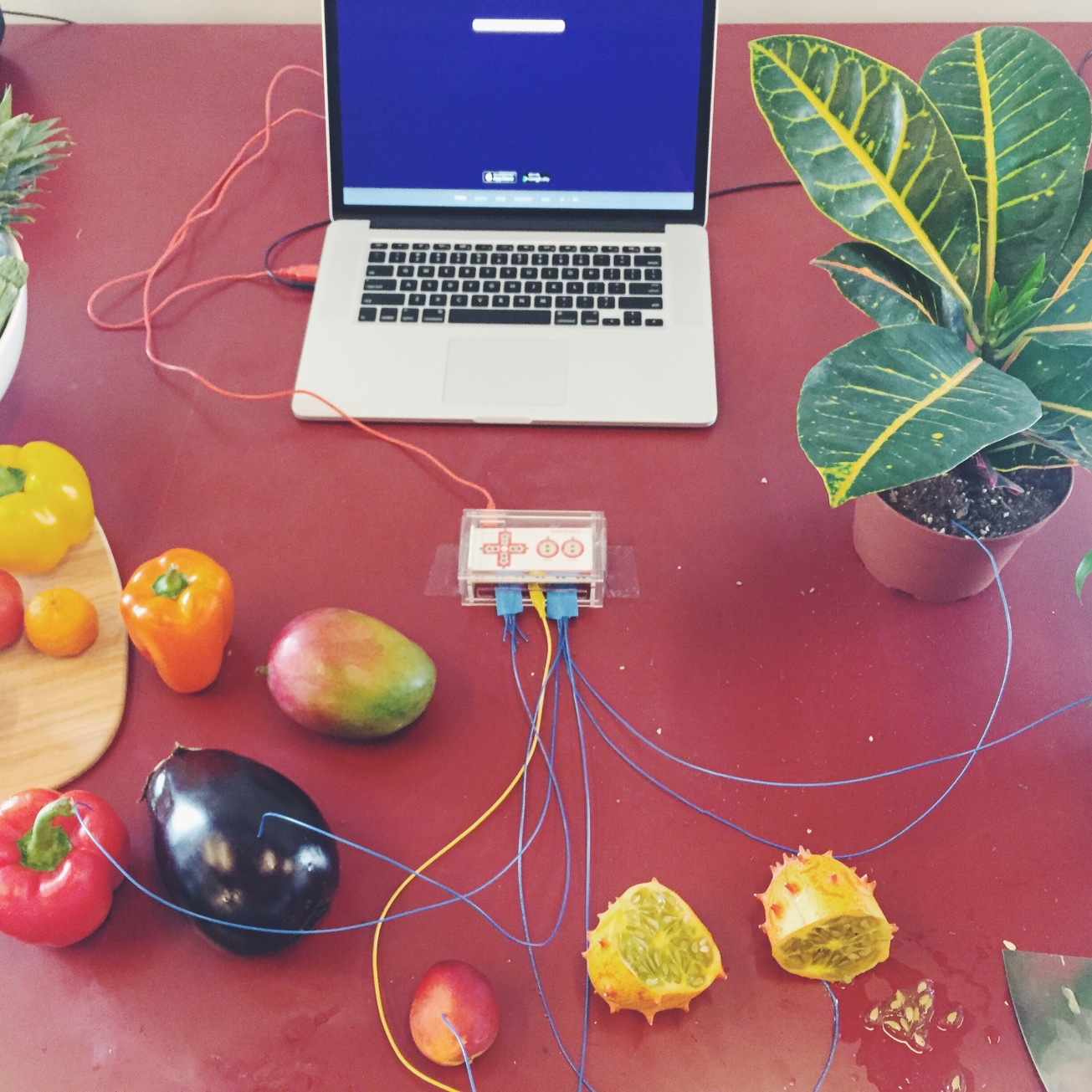 making music with fruit! playing with food is fun.

I really enjoyed myself, heard inspiring talks from the Mayor, as well as LEVAR BURTON! SO AWESOME.

Before the class at True Collaborative Showroom

My next workshops were hosted by True Collaborative Fashion Showroom in DTLA. Their space is amazing and it was perfect place to teach, there are many place to hang things… Also I love their furnishings! I was excited to share my macrame knowledge.

The night before, I was on the phone with my guy, and he asked me if I had enough rope for my trip. I said, oh yeah, it is being sent to me in LA! He was quiet on the end of the line. The rope company had shipped the rope to Portland instead. I ended up having a very stressful morning, and luckily I had JUST enough rope to teach so that everyone was able to make their beautiful pieces. WHEW! narrowly missed total breakdown.

And then the food showed up, and all was good in the world. The workshops were catered by Urban Palate.  I heard about them (and tasted their amazing food), at Justina Blankeney’s book launch for #TheNewBohoBook in April. When I confirmed my classes I knew I had to have their fantastic and pretty treats.

the pretty set up from URBAN PALATE.

A row of plant hangers by my students

After class, I packed up all my things, and headed back to Topanga to a beautiful party in the hills. I didn’t even go home first. I knew that if I did, I would never make it out again…

The party was hosted at the coolest house, all pieced together with mismatched windows and loft spaces, skylights and a big fireplace. We sang and played music late into the night. I didn’t get to take any photos, I was there experiencing all in the moment. Lots of smiles, new friends, and a sweet night.

The next morning, after waking up and eating breakfast with my Topanga pals, I headed back to east LA, to meet up with a surprise guest. My sweetheart, Adam, flew down for 2 days to hang out with me. We had been apart now for barely 2 weeks, and it was going to be another 2+ weeks before we saw each other again. The flight was cheap(ish) and totally worth it for a magical, romantic, (mostly eating) adventure together around LA.

Over the course of 2 days we ate at Blossom,  ran a few errands, drank juice and coffee at Verve, ate burgers at Umami Burger, took some naps, drank cocktails at Bar Stella, ate yummy breakfast at Kitchen Mouse, and then met up with our friends Tracey and Tyler at the Line Hotel for dinner at The Commissary.

drinks at Bar Stella with my sweetheart

A fav breakfast at Kitchen Mouse

More plant inspiration at the Commissary at the LINE

our pals Tracey and Calder 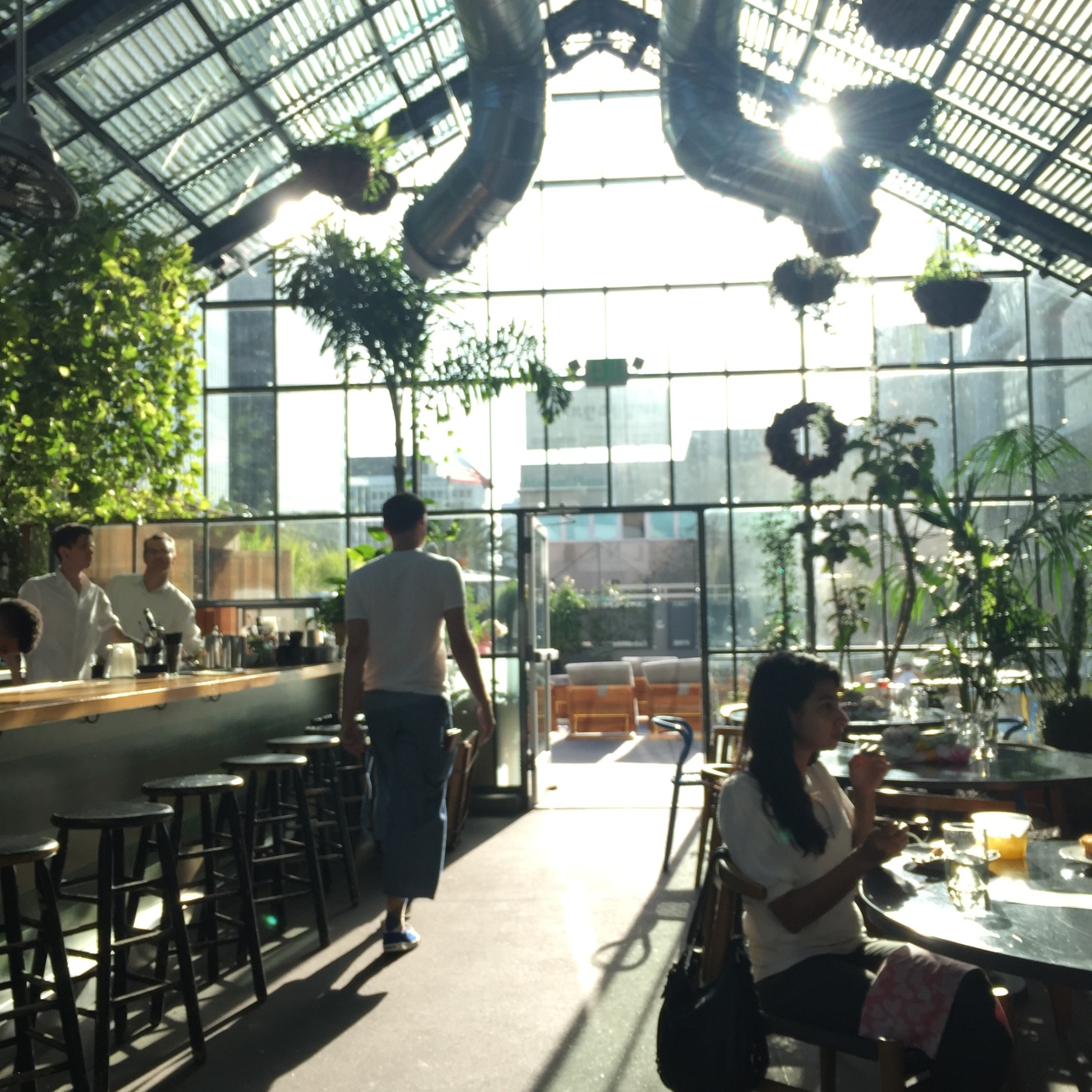 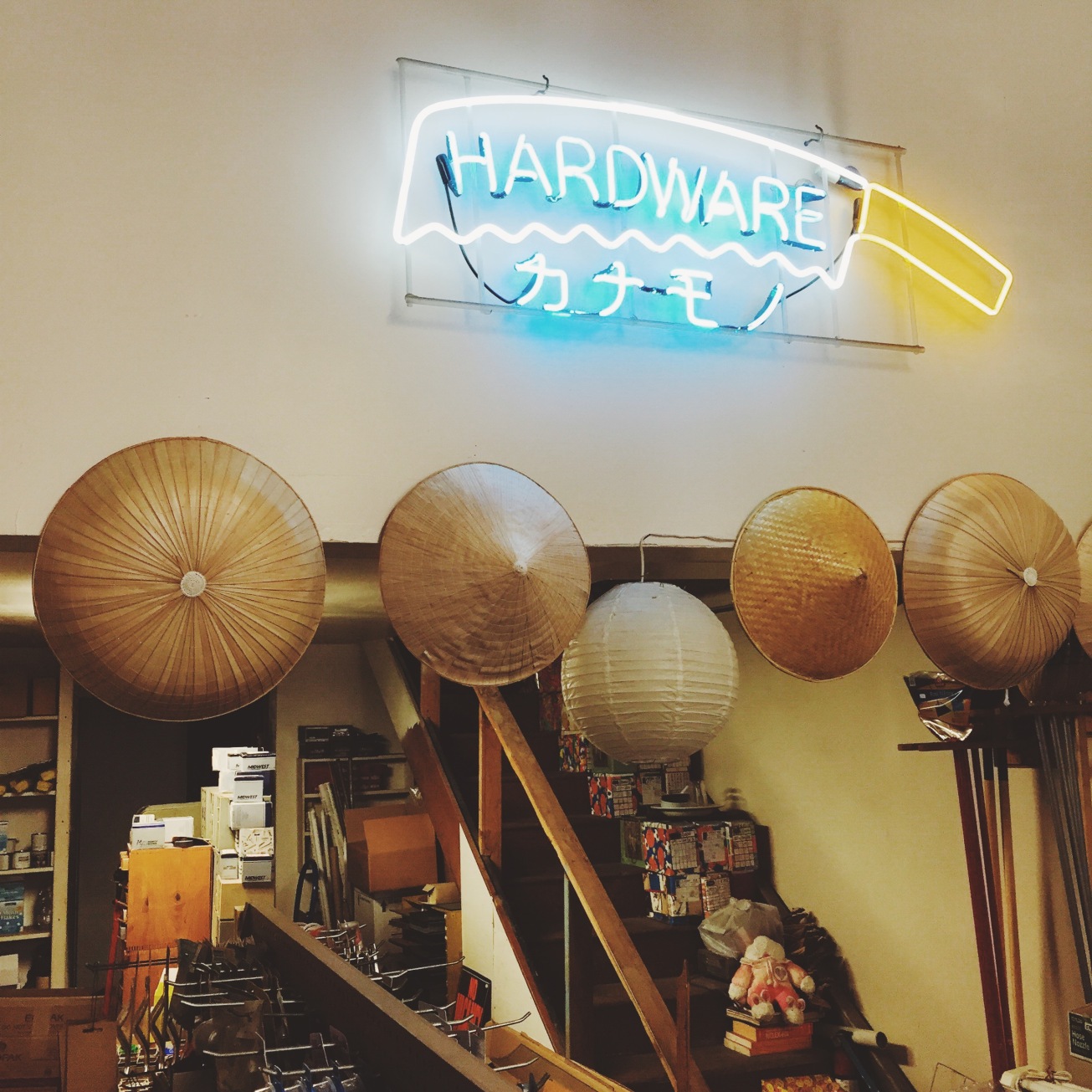 a rad hardware store in Japantown…Winning on the odd objects and the amazing neon.

So, pretty much I spent my final LA moments eating and drinking and sleeping (and cuddling).

The next morning I kissed my sweetheart goodbye, and drove north in Winning the Truck, with 8 hours of road ahead of me, on my way towards Mendocino for the Spiritweavers Gathering.

The next installment will be up in the next few days! Thanks for following along!